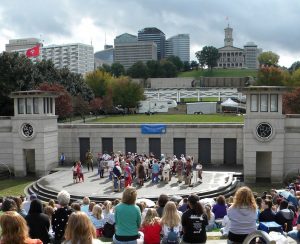 The Tennessee State Capitol, in the background

Now that we know what governments do and where they get their money, we’re going to talk about one place in particular — your home state of Tennessee.

Tennessee is one of the 50 states in the United States. It is located in the southeastern part of the country, which is in the bottom right the way most U.S. maps are set up.

You’ll learn a lot more about Tennessee’s geography and history elsewhere on this site and in the Tennessee History for Kids booklets. But here are some things that are important to know in order to understand Tennessee’s government:

Bill Lee is the governor of Tennessee.

You can see Tennessee, the state with a
star on it, on this map of the United States.

Tennessee wasn’t one of the 13 Original Colonies. Settlers were moving into Tennessee while the American Revolution was taking place. At that time, what we now call East Tennessee was part of North Carolina.

The name “Tennessee” is derived from a Cherokee Indian village in Monroe County called “Tanase.” Unfortunately, the site of Tanase is now underwater because there is a man-made lake there called Tellico Lake.

In 1796 Tennessee became the 16th state in the United States. But most of what we now call Tennessee was still Native American land back then, which belonged to the Cherokee and Chickasaw Indian nations.

* Tennessee’s flag is red, with a circle in the middle that has three stars in it. The three stars represent East, Middle and West Tennessee — Tennessee’s three “Grand Divisions.”

Kingston was the capital of Tennessee for one day

Nashville is the Tennessee state capital, which means the place where the state government is based.

But Nashville hasn’t always been the state capital. Earlier in Tennessee’s history, the capital was in Knoxville, Kingston, and Murfreesboro.

Finally, do you know what a symbol is?

A symbol is something that makes people think of something else.

The Tennessee flag is a symbol of Tennessee. But the state government also picks certain animals and plants to be symbols of the state. There are many of them. Here are a few:

The state wild animal is the raccoon.

Raccoons are cute critters. But if you see one in the wild, or in your yard, do not approach it! They have a mean streak.

The state reptile is the box turtle.

If you see a turtle crossing the road, you should move it to the side of the road. 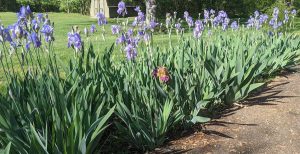 The iris is the state flower.

The state tree is the tulip poplar.

And now let’s talk about how Tennessee’s government is set up. Click here.

Tennessee History for Kids has a video that goes with this section.

In “What kind of mall is this?,” History Bill checks out Nashville’s Bicentennial Mall and finds an outdoor museum of Tennessee history. And he always did want to walk across the state in seconds.