To describe the terrain, people often divide the state into six physical regions.

Moving from west to east:

The western third of the state — the entire Grand Division of West Tennessee — is Gulf Coastal Plain. This is where the elevation of the state is lowest and the land is flattest.

Agriculturally, the Gulf Coastal Plain has been known for its production of cotton, although today you will find some soybeans and corn fields in that part of the state.

Large parts of the West Tennessee and the Gulf Coastal Plain are flat. You can tell this by looking at a map of Tennessee and noticing that so many of the highways are straight. In all parts of the United States, straight roads are a sign of flat areas.

The largest cities in the Gulf Coastal Plain are Memphis and Jackson.

2 and 3. Highland Rim and Central Basin 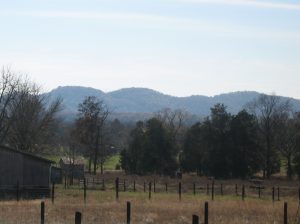 In this era of the interstate superhighway, it can be hard to distinguish between the Central Basin and the Highland Rim. But it you look for it, you’ll notice the change. The next time you ride southeast on Interstate 24 (from Nashville to Chattanooga), notice how flat it is in Rutherford County. But when you get to Coffee County you go slightly uphill for a few miles. That, you see, is where the Central Basin becomes the Highland Rim. 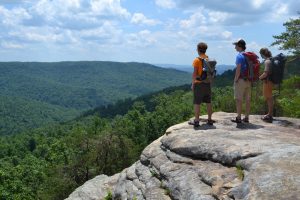 As you ride through Tennessee, you suddenly go WAY up elevation wise at the Cumberland Plateau, a rugged upland region that extends from the Kentucky border in the north to the Georgia and Alabama border to the south.

The top of the Cumberland Plateau is between 500 and 900 feet higher than the land lying to the west and east of it. Because of this, the plateau gets colder weather and more snowfall than land on both sides of it. 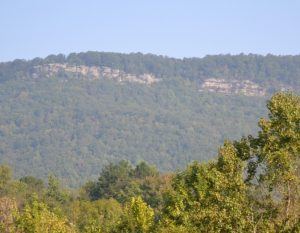 The Cumberland Plateau viewed from the town of Rockwood

After the Civil War and the development of railroads, mining became big in the Cumberland Plateau. Most of these mining towns have long been abandoned.

By the way, there is a remarkable valley that cuts through the middle of the Cumberland Plateau. It is called the Sequatchie Valley, and it runs about five miles wide through the heart of Marion, Sequatchie and Bledsoe counties.

The valley and ridge, as you might expect, is a series of valleys divided by ridges that run through most of east Tennessee.

This Hawkins County farm is in the Valley and Ridge region

The city of Knoxville lies at the heart of the Valley and Ridge. Knoxville is close to where the Holston and French Broad rivers merge to form the Tennessee River. 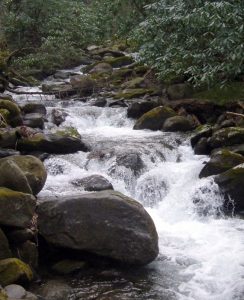 A creek in the Unaka Mountains

It’s a great place to visit. But early settlers found it to be a rough place to cross and difficult place to farm. 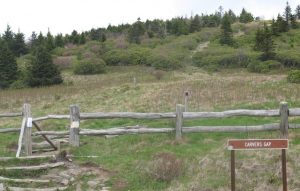 All of Tennessee’s early settlers had to pass through the Unaka Mountains on foot, on a horse, or in a wagon led by a horse. They would have done so at slight “gaps” in the mountains, such as Carvers Gap in northeast Tennessee.

Click here to go to the next chapter, about Tennessee’s counties.