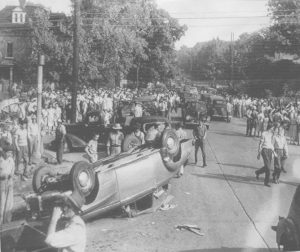 The scene after the Battle of Athens
PHOTO: TN State Library and Archives

1. In 1946 there was open rebellion in McMinn County between hundreds of World War II veterans, organized as the “GI Non-Partisan League” and the sheriff and some of his deputies. The battle occurred because the veterans believed that the election was being stolen. For an entire night, the streets of Athens were blazing with gunfire, although no one was killed in the incident.

By the time it was all over the incident drew national attention to emerging conflict between entrenched politicians and the veterans returning home from the war.

This incident is known as the Battle of Athens. 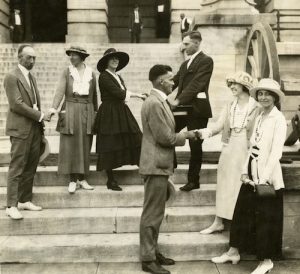 Suffrage leaders thank and congratulate Harry Burn (in the front) for his vote on the suffrage amendment.

2. Also related to McMinn County: Normally, politicians who waver and change their vote unexpectedly are heavily criticized for doing so, but a McMinn County native once did just that and is now celebrated for it.

On August 18, 1920, a little-known state representative named Harry Burn changed his mind at the last minute and decided to vote in favor of Tennessee’s ratification of the Nineteenth Amendment (which granted the right to vote to women). He later said that he did so because his mother had told him to vote “yes” on the suffrage amendment, in a letter which he carried in his pocket. Burn’s vote resulted in Tennessee’s ratification, and thus the passage into law of the suffrage amendment.

For much more on the passage of the Nineteenth Amendment, click here. 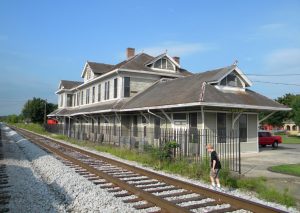 3. In McMinn County you will also find the community of Etowah.

In 1902 the Louisville & Nashville Railroad chose this to be the site of a company headquarters between Atlanta and Cincinnati. The railroad created the town of Etowah for this purpose. The handsome former train station here is the main remnant of the town’s original identity.

Today the structure houses a small railroad museum, the Chamber of Commerce and the office of the Tennessee Overhill Heritage Association.

The Niota train station, where slaves were sold in April 1863

4. Speaking of old train stations in McMinn County, here is the one in Niota, a community once known as Mouse Creek Landing.

Perhaps one day this will result in some type of slavery monument here. 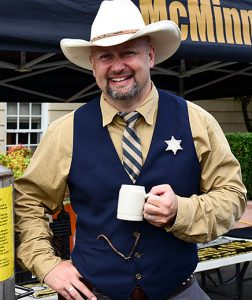 5. Finally, McMinn County is the only county in Tennessee where the county historian happens to be the sheriff!

If you want to ask someone about the Battle of Athens, or about Harry Burn, or about the Etowah Train Station, you can do worse than ask Sheriff Joe Guy — an author of several local history books and the official McMinn County historian.

We photographed the McMinn County Courthouse in Athens.

In August 1920, the Nineteenth Amendment to the U.S. Constitution passed when the Tennessee State House ratified it. A young House member named Harry Burn changed his vote that day, as this story points out:

According to the article, why did Harry Burn vote yes on the suffrage amendment?