There’s not much left of it except a few stories. 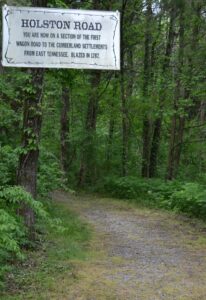 In Middle Tennessee, the first road across the Cumberland Plateau went by the name Holston Road

The first road across the Cumberland Plateau connected Fort Southwest Point (on the east side) to Fort Blount (on the west side). It went by several names, including the Holston Road, the Fort Blount Road, Avery Trace and the Cumberland Road. Thousands of people traveled it between 1785 and 1805, including Andrew Jackson, Governor William Blount, Bishop Francis Asbury and Louis Philippe (the future King of France).

After the Cherokee Indians ceded ownership of the Cumberland Plateau, other routes across the mountains emerged. People forgot about the original road, its landmarks and the two forts.

We explored from one side of the plateau to the other with the help of Dr. Calvin Dickinson to see what we could find of the old road. 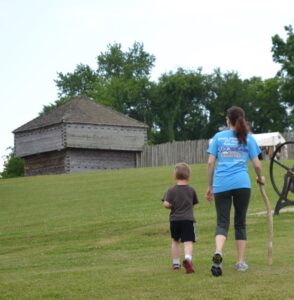 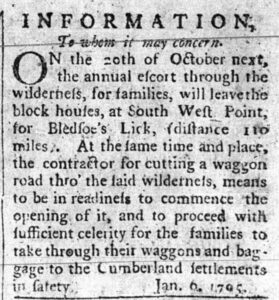 As this January 9, 1795, ad in the Knoxville Gazette says, the armed military escort heading west across the Cumberland Plateau from Fort Southwest Point would leave in October of that year.

There are some great stories about Fort Southwest Point. In 1799, missionary Frederick Schweinitz stopped at an inn near the fort. One night, he and his companions slept on the floor and were kept up all night by a card game. “The continual racket of the drunken and the players did not permit us to close an eye,” complained Schweinitz. 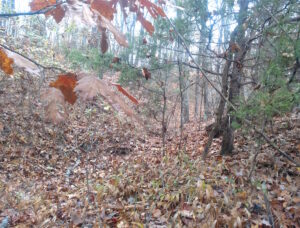 Leaving Kingston, migrants crossed the Clinch River by ferry and climbed to the top of the Cumberland Plateau using what we think is the present-day route of Highway 70. In the late 1700s, migrants had a hard time getting up the steep mountain; some would carry their possessions in stages from the bottom to the top rather than risk taking them all up by wagon at once. “Wagons cannot go down the mountain otherwise than with the brake on all wheels and with, besides, a great tree hung on behind,” Schweinitz explained.

Today, as you climb Highway 70, you will see an old roadbed off in the woods. This may be the original road up the mountain; we aren’t sure. 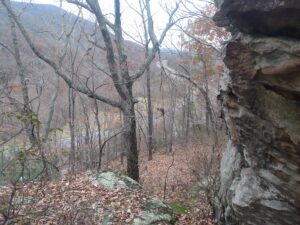 Looking down from Spencer’s Rock onto Interstate 40.

Moving west, the road passed through a beautiful valley between two mountains near the present-day community of Crab Orchard.

In April 1794, long hunter Thomas “Big Foot” Spencer was killed here, which is why a massive rock that towers over the valley here was named for him. Spencer’s death was not unique; hundreds of people were killed along the road between 1785 and 1795, mostly by American Indians. This was, after all, a time of war between the settlers and the Native Americans.

In 1802 an inn was built at Crab Orchard, and many important people from early Tennessee history stayed there (such as Andrew Jackson and James K. Polk). That hotel would be expanded over the years and remained until the 1930s.

There’s an Interstate 40 rest area about ten miles west of Spencer’s Rock. There you will see a historic sign for Kemmer Tavern, a stop along the old road across the plateau. If you explore the woods next to this rest stop, you will find the remnants of the original road, near Daddys Creek. 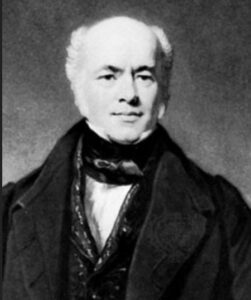 This is a good time to point out that before 1795, most people traveled in large groups along this road (for safety), but after 1795 they often traveled alone or in pairs. One interesting example was Francis Baily, an English scientist who took the road in 1797 and wrote a detailed journal of his experiences. One evening Baily was thirsty and all his efforts to find water failed; he fell asleep parched and worried about dying of thirst and was awoken by a thunderstorm that gave him plenty of water. Baily encountered friendly people along the way, including a party of Cherokees. “A few Indian women were dressing some victuals,” he wrote. “They told us their husbands were gone out to hunt . . . We entered into conversation with them, and exchanged some salt and gunpowder for some moccasins.”

Travelers along the road often reported that there were long stretches without water, especially in the summer. Wild game, on the other hand, was not hard to come by. “There is more game in this desert than in a hunting preserve at home, and I imagine the Cherokees set great store by it,” said one traveler from Europe. “Here are many bears, deer, some buffalo, few elk.”

An abandoned part of the old road across the Cumberland Plateau PHOTO: Tim Manning, from the book Thoroughfare for Freedom: The Second Atlas of the Cumberland Settlements

After Kemmer Tavern the road headed west, following the general path of Interstate 40 in the direction of Monterey. Near present-day Monterey there was a landmark known as Flat Rock where many travelers reportedly camped. Unfortunately, Flat Rock is on private property today and cannot be reached.

At Flat Rock the trail forked. The left fork headed due west to what is now called Carthage (along what became known as the Walton Road) along the present day path of 70N. The right fork headed northwest to Fort Blount, using the route now known as State Highway 290.

The path to Fort Blount passed a source of fresh water known as Blackburn Spring before descending alongside a small body of water called Flynn Creek. Travelers then crossed the Cumberland River by ferry to get to Fort Blount. 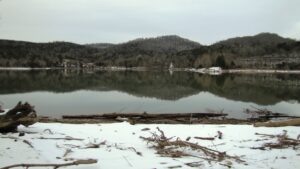 For a brief phase of history, Fort Blount was pretty busy. In 1788, at least 60 families crossed the Cumberland River there on their way to Nashville–many of them leading livestock as they went.

In March 1796, French botanist Andre Michaux spent the night at Fort Blount and discovered a species of tree (previously unknown to Europeans) in the woods near the fort. Today we know this tree as the yellowwood.

In May 1797, Tennessee Governor John Sevier passed through Fort Blount. 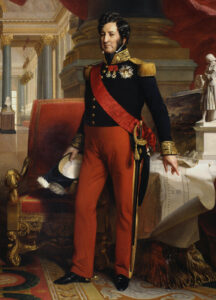 Four days later, a Frenchman arrived on horseback. He said he and his companions had left Fort Southwest Point three days earlier and were on their way to Nashville. In broken English, he said they were hungry and willing to pay for food.

The visitors from far away were disappointed by the accommodations. According to their leader’s journal, they were fed “cornbread, a little milk and fatback of bear, salted and smoked, which we found impossible to swallow, hungry or no.”

This man, Louis Philippe, was the son of King Louis XVI of France (who had been executed in the French Revolution only four years earlier). Louis Philippe would later serve at the king of France from 1830 to 1848, and he often told people about his strange adventures in Tennessee. 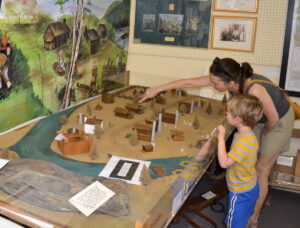 You can see a model of Fort Blount at the Jackson County History Museum in Gainesboro.

Fort Blount was not there for long. Relations with the Cherokee improved after 1796 and the government withdrew soldiers from the area by early 1798. Since people grew to prefer other routes across the mountain (especially the Walton Road), people forgot about Fort Blount and the Williamsburg community around it. Eventually the fort vanished and people forgot where it had been!

In the 1980s, the Tennessee Division of Archaeology found the remains of Fort Blount, using old maps, documents and first-person accounts. Archaeologist led by Samuel Smith found evidence of several structures, thousands of piece of kitchen artifacts, 495 piece of kitchenware, 38 musket balls, nine belt buckles and 181 buttons. They even found nine coins—one marked with the year 1781. 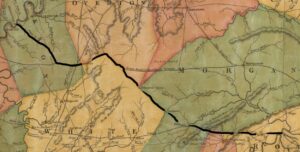 The black mark shown here, on Matthew Rhea’s 1832 map of Tennessee, shows the location of the original road across the plateau.

It sounds like a treasure trove. But we can only imagine the other things forgotten and buried along the abandoned road across the Cumberland Plateau.

To read some of these first-person accounts, we recommend the following book which you may be able to find in the local library: Early Travels in the Tennessee Country by Samuel Cole Williams (published in 1928, reprinted in 1972). For Louis Philippe’s account, see Diary of My Travels in America: Louis-Philippe, King of France (1830-1848).

Calvin Dickinson was the expert about the first road across the Cumberland Plateau. A longtime history professor at Tennessee Tech University, Dickinson wrote several books about the history of that part of Tennessee. 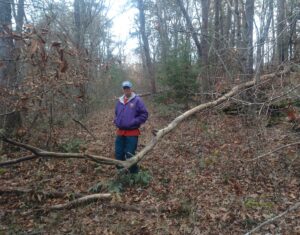 Calvin Dickinson on the original roadbed of the first road across the Cumberland Plateau, near Kenner Inn.

Dickinson spoke at our fall retreat in October 2017 and later accompanied “History Bill” on his exploratory trip across the plateau, where many of the photos shown here were taken.