Beauty Spot, on the Appalachian Trail in Unicoi County

Most of the virtual tours you will find on Tennessee History for Kids are of a home, a museum, a state park or some such finite place.

Now for a piece of land that is six feet wide and hundreds of miles in length.

The Appalachian Trail stretches more than 2,000 miles from Georgia to Maine. It crosses mountain crests, streams, rivers, dirt roads, interstate highways, historic routes and small towns along the way. Some of the more scenic parts of the trail are in Tennessee.

Because the Appalachian Trail is so famous, there are entire books on its history. People attribute the trail’s existence to a series of far-sighted conservationists, the original which was Benton MacKaye.

In the 1920s, MacKaye dreamed about a line of farms and wilderness camps along the crest of the Appalachian Mountains that would be loosely connected. Eventually a man named Myron Avery shifted this plan into a single trail that was planned, obtained, and blazed by thousands of people in 14 different states.

The first documented case of someone hiking from one end of the trail to the other was in 1948. Since then, thousands of people have done it, walking from 10-20 miles per day and staying in some of the more than 250 shelters and campsights along the way.

This map of the AT in the Great Smoky Mountains shows how the trail is, for miles, the boundary of Tennessee and North Carolina.

One thing that makes the Tennessee portion of the “AT” (as it is affectionately known), is that we share most of our part of the trail with another state. For an estimated 200 miles, the AT is very close to, or serves as, Tennessee’s boundary with North Carolina. This means that most of the people hiking along the Appalachian Trail in our neck of the woods are actually stepping back and forth from one state to another as they go.

Volunteers working on the AT
PHOTO: Appalachian Trail Conservancy

The AT enters Tennessee from Virginia, at the border between Sullivan County and Johnson counties. After passing through that area, it transverses parts of Carter, Unicoi, Greene, Cocke, Sevier and Blount counties before heading southeast into North Carolina.

Within our boundaries, the trail is maintained by three volunteer organizations — the Smoky Mountain Hiking Club, the Carolina Mountain Club and the Tennessee Eastman Hiking & Canoeing Club.

We’re going to show you parts of the trail in Tennessee.

In extreme northeastern Tennessee, the trail proceeds along the border of Sullivan and Johnson counties, along the top of Holston Mountain. One of the better-known landmarks here is the “Uncle” Nick Grinstaff Monument, which honors a man who “lived alone, suffered alone, died alone.”

Today, many people visit this monument in groups, and they don’t look like they are suffering very much.

In Carter County the trail winds around Watauga Lake. Talk about pretty!

Not far from there, it goes right by one of several waterfalls in Tennessee that goes by the name Laurel Falls.

Not long after that the trail crosses Dennis Cove Road, which is where we found these hikers (shown on the left).

Also in Carter County, the trail passes through Yellow Mountain Gap, which is where the Overmountain Men crossed the mountains on their way to the Battle of Kings Mountain during the Revolutionary War.

A few miles from there it passes Carver’s Gap, one of the most beautiful places in Tennessee. Check out the view from there!

The former site of the Cloudland Hotel

Further along the trail in Carter County, there used to be a wonderful hotel called the Cloudland Hotel. Now there is only a sign!

There are some very beautiful parts of the trail in Unicoi County. 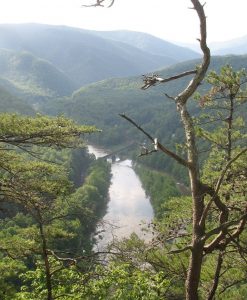 Here is a shot of the Nolichuckey River, taken from the AT.

A little further, the AT dips down into Erwin, one of the better known towns along the trail.

There is a hostel a few yards away from the trail in Erwin known as Uncle Johnny’s. If you want to sit for a spell and meet some people who are hiking the Appalachian Trail, this may be the best place in Tennessee to do so.

The AT in Greene County

Through most of its journey through Greene County, the AT hugs Tennessee’s border with North Carolina in some very remote parts of the state, including the northern part of the Cherokee National Forest.

You can see Big Butt on this map!

Also along the Appalachian Trail in Greene County you will find one of our favorite place names in Tennessee: Big Butt.

In Cocke County, the best known footpath in America crosses one of the busiest interstates in America (Interstate 40).

One would think that this would merit a visitors center, or a plaque, or a sign, or something. But the only clue that the Appalachian Trail goes under I-40’s Exit 451 is a white speck on the traffic sign, meant to assure hikers of the route.

By the way, the mile of the AT south of where it crosses I-40 is the last mile of the trail completed in the southern part of the United States — blazed in 1936.

From here it is a strenuous day hike to a wonderful overlook called Max Patch.

Some of the busiest and most scenic parts of the Appalachian Trail are in Sevier County.

Here is Charlie’s Bunion, one of the most visited landmarks in the Great Smoky Mountains National Park.

Four miles south of Charlie’s Bunion, the trail goes through a parking lot at Newfound Gap.

A few miles south along the trail you will find Clingman’s Dome, the highest point in Tennessee (6643 feet!).

When you visit Clingman’s Dome, you will notice that many of the trees at this elevation are dead or dying. Park rangers tell us that this is happening because of two things: one is a microscopic animal called the Balsam woolly adelgid, which has been killing large fir trees for a generation. The other cause, they believe, is air pollution.

The trail then crosses into Blount County, where one of the main trail destinations is Gregory Bald, especially in the Spring because of its beautiful azalea flowers.

Near there, the the trail passes Rocky Top, an overlook that is believed to be the namesake for the University of Tennessee fight song.

About half way across Blount County the trail takes a turn to the left and heads into North Carolina, where it remains until it crosses into Georgia.

For more about history of the AT and organizations that maintain it, click here.

And thanks to George Ritter and Andrew Johns for their help in putting this virtual tour together.

Here is a map that shows the long route that the Appalachian Trail takes from Maine to Georgia.