The Parthenon in Nashville

It may be the most photographed building in Tennessee.

In Nashville’s Centennial Park you will find an exact copy (or replica) of the Greek Parthenon. Inside it you will find a small art museum and a not-so-small statue of the Athena, who was a goddess in the Greek religion.

In this virtual tour we will explain why this building is here and we will tell you a few things about the architecture and sculptures you will find if you visit.

Greece and the Parthenon

Why did Nashville residents build a replica of a Greek building in the first place?

The answer has to do with Greek history and culture. Democracy was first developed in Athens, Greece, during the sixth century BCE. (That’s over 2,500 years ago!) Although only adult male citizens could vote in ancient Greece, the Athenians had an elected assembly which made decrees, passed laws, and even held trials.

When members of the Second Continental Congress created a plan for the United States government, they were inspired by Athenian Democracy. Many of the basic ideas in the U.S. Constitution first came from the Greeks.

The ruins of the Parthenon in Greece
PHOTO: Viacheslave Loptatin/Shutterstock

The most famous building in Athens, Greece, was the Parthenon. It was originally built to be a temple of the Greek goddess Athena. Unfortunately, the original Parthenon building was largely destroyed in 1687 in an explosion that left only several of its columns standing.

As Tennessee neared its Centennial anniversary in 1896, Nashville’s leaders decided they wanted to put on a big exposition to celebrate all that the city, and the state, had accomplished. Taking their cue from expositions which had been put on by other cities throughout the country, Nashville built a series of buildings to showcase the state’s commerce, history and culture. They were made of plaster and meant to be temporary.

During the Centennial Exposition, the Parthenon wassurrounded by other buildings, including a Pyramid. Can you spot the Parthenon’s skylight?
PHOTO: Metro Nashville Archives

At the centerpiece of the grounds was a replica of the Parthenon.

The Centennial Exposition of 1897 — it happened a year later than originally planned — ran for six months. People, including President William McKinley and suffrage leader Susan B. Anthony, came from all over the United States to see the exposition grounds, take in the museum displays, see the shows, and even ride the rides. The Centennial Exposition of 1897 was a big event for Nashville, Tennessee, and the South.

After the exposition ended, all of the buildings were torn down, except one. Even though the Parthenon was made of plaster, wood and brick and not  made to last, Nashville’s residents couldn’t bear the thought of tearing it down because it was too beautiful. It remained standing for another two decades. 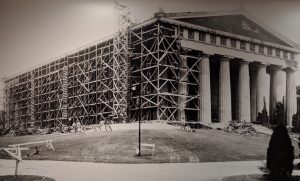 The Parthenon is rebuilt in the 1920s
PHOTO: Collection of the Parthenon

In 1920, Nashville’s leaders decided to rebuild the Parthenon, this time using materials that would last. The original Parthenon in Greece was made of marble, and there was no way that the city could afford to have use. Instead, the construction company (Foster & Creighton) rebuilt the walls and columns of the building using what is known as aggregate concrete.

Although the building materials are different, Nashville’s Parthenon is identical in size and architecture to the original Parthenon. If you come visit Nashville’s Parthenon and take a tour of it, you can learn quite a bit about how it was built and what every sculpture and statue in it is mean to depict. But for now, there are three things we want to mention:

The pediment on the west end of the Parthenon. 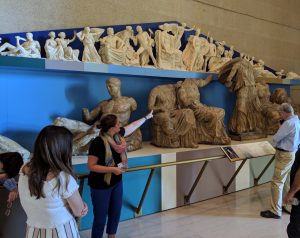 Katie Petrole, director of education for the Parthenon,
explains some of the sculptures on the pediment.

As you face the Parthenon from the east or west directions, look up at the triangular upper part of the building. This part of the outside of a building is called the pediment, and there are remarkable states inside the pediment on both sides. At first they make look similar, but they are not the same.

In the 1920s, two artists named Belle Kinney Scholz and Leopold Scholz were hired to create the sculptures in the pediments. They tried to recreate the exact statues that had been in the Parthenon in Greece.

The many figures depicted on the pediments may seem like a lot to absorb from the outside of the Parthenon. Once you get inside the building, however, you will find reproductions of all of the statues on the pediment, and you may be able to ask a tour guide about them. 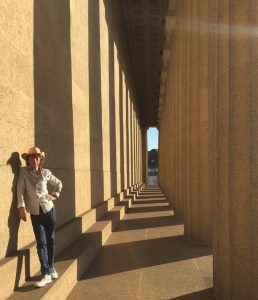 There are a lot of columns in Greek architecture. This is something you will notice at many Greek-style buildings such as the Tennessee State Capitol and the Schermerhorn Symphony Center.

The Parthenon has 8 huge columns in the front and 17 on the side. This makes it one of the few buildings in the world that allows you to walk all the way around it while staying dry the whole time, even when it is raining. And, as you can see in the photo on the left, you never know who you might see hanging out in the colonnade.

The Parthenon is in Davidson County, about three miles west of downtown Nashville

On August 21, 2017, Middle Tennessee experienced a total eclipse of the sun. Thousands of Nashville residents experienced the event at Centennial Park, with the Parthenon as a backdrop.

Here are some photographs that were taken of the Parthenon on that day:

About twenty minutes before total eclipse 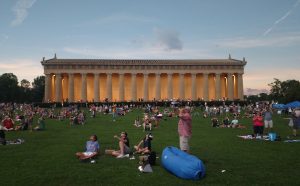 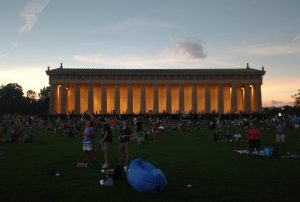 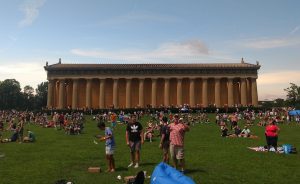 Ten minutes after the total eclipse