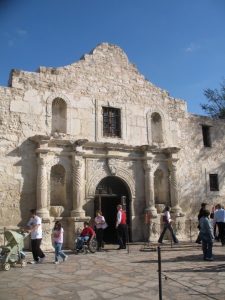 In San Antonio, Texas, there is a place with a special role in American history. It is called The Alamo, and the very mention of it stirs hearts all over the Lone Star State.

The Alamo is also important to Tennesseans. At least thirty of the Americans who died at the siege at The Alamo were from Tennessee — the most famous being David Crockett. So you can feel the fighting spirit of Tennesseans at The Alamo.

Reenactors at The Alamo

So what is The Alamo? It was, at one time, a Catholic mission built by the Spanish government at a time when Mexico was a Spanish colony and Texas was part of Mexico. The mission’s original name was the San Antonio de Valero Mission.

In 1821 Mexico became independent from Spain. During the next decade, thousands of Americans moved to Texas searching for new opportunities. Many came from Tennessee. In fact, more people migrated to Texas from Tennessee during this era than from any other state.

The most famous of the Tennesseans to move to Texas were Sam Houston and David Crockett. Houston had actually been the governor of Tennessee from 1828 to 1830, but resigned that office (for reasons that have never been understood) and moved to Texas. When the Texas War of Independence began against Mexico, Houston was made a major general in the Texas Army. 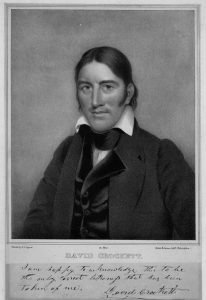 Crockett represented Tennessee for three terms in the U.S. House of Representatives, but was defeated in an election in 1835 and left the Volunteer State shortly thereafter. He arrived in Texas just in time for the war of independence against Mexico.

In October 1835 hostilities broke out between Texas rebels and the Mexican government of General Antonio Lopez de Santa Anna. As General Santa Anna and his army moved across Texas, a small army of citizen soldiers opposed to Santa Anna defeated a Mexican garrison in San Antonio and decided to stay there, at The Alamo.

This small rebel force was, in some ways, one of the most diverse fighting forces of all time — united only in their opposition to the dictator Santa Anna and their desire for Texas independence. Among the soldiers were people who had been born in Mexico, Texas, Denmark, Germany, England, and the United States (some of them could hardly communicate with one another). So it was a ragtag force of about 200 that awaited Santa Anna’s army of 4,000. 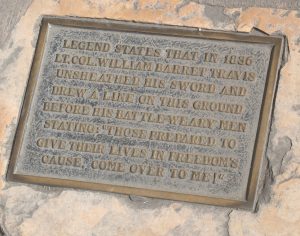 Here is the plaque that commemorates
General Travis’ famous quote.

General Santa Anna’s army arrived in San Antonio on February 23 and laid seige to The Alamo.

What took place during the next 13 days is part legend, part fact (the truth is hard to discern because so few of the defenders survived). At one point, Colonel William Travis is said to have drawn a line in the sand with his sword and told asked his men how many of them were willing to step across it and give their lives for the cause.

Although it is impossible to know exactly where this took place, there is a plaque at The Alamo that commemorates this famous quote, and the line Travis drew in the sand is often referred to as the “Grand Canyon of Texas.”

Today The Alamo has been recreated to the way
it might have looked prior
to Texas’ War of Independence.

During the 13-day seige, the men defending The Alamo fought bravely, but they knew that they had little chance of winning unless they got help. On March 6, 1836, the final assault arrived, as columns of Mexican soldiers charged into and over the The Alamo’s walls.

The battle was over by sunrise.

Of the 200 or so soldiers who fought in defense of The Alamo, practically none survived (there is an outside chance that one or two did survive, and historians debate that point). There were, however, some women and children present at The Alamo — one of whom was Tennessee native Susanna Dickinson. Susanna Dickinson was the wife of Almeron Dickinson, artillery officer under Colonel Travis. Both were present, along with their 15-month-old daughter Angelina, at the seige of The Alamo.

According to Susanna Dickinson, the final battle had lasted about two hours when her husband “rushed into the church where I was with my child and exclaimed, ‘Great God, Sue, the Mexicans are inside our walls! All is lost. If they spare you, save my child'” Almeron Dickinson then plunged into the fighting and was killed. 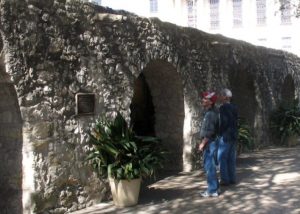 This part of The Alamo is known as the Long Barrack
Museum; when the seige took place this is where
the infantry and artillery quarters were located.

General Santa Anna did spare the lives of Susanna and Angelina Dickinson. After the battle was over he sent Susanna Dickinson with a letter to Sam Houston demanding that the rebellion against the Mexican government cease immediately.

Upon receiving it, Houston did retreat eastward, in what Texas history refers to as the “Runaway Scrape.”

But a few weeks later, with the cry of “Remember the Alamo” on their lips, soldiers under Houston’s command defeated Santa Anna’s army at San Jacinto, the military event that assured Texas’ independence.

Texas would remain an independent country for nine years, and became part of the United States in 1845. 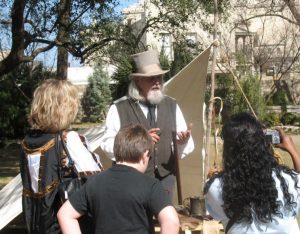 A reenactor at The Alamo 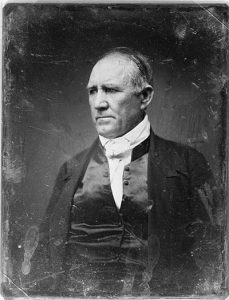 But in 1861, Houston became the only American to have resigned the governorship of two states, when he refused to take the oath of allegiance to the Confederate States of America after the Texas legislature voted to leave the union. 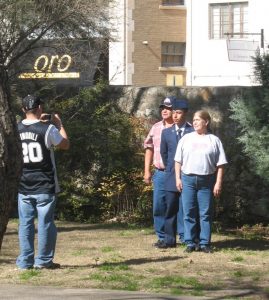 Here are some more pictures from our trip to The Alamo:

Inside the walls of The Alamo itself, it is easy to forget this unless you look up and see that there are large buildings towering over you such as this one.

The Alamo is one of the most photographed places in Texas. Here a family poses with one of its members who recently enlisted in the U.S. Air Force. 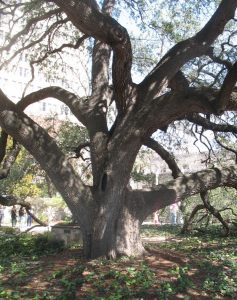 One of the reasons this is such a photographed place is the beauty of the surroundings inside. Check out this magnificent oak tree! According to the staff at The Alamo, it is about 135 years old.

If you leave the walls of The Alamo you will see the name of David Crockett everywhere. By the way, the name isn’t “Davy,” it’s David. During his lifetime he never went by the name of Davy, a title made popular by a song in the 1950s.

Tennessee History for Kids is especially grateful to Alamo historian Dr. Bruce Winders and Alamo education coordinator Sally Koch for helping us with the tour and the video.

IN SEARCH OF David Crockett